Relations between prenatal testosterone (T) levels and cognitive abilities at age 4 were examined for 28 girls and 30 boys. Prenatal T levels were measured in 2nd trimester amniotic fluid samples obtained by amniocentesis and were examined in relation to scores on tests of cognitive abilities. For girls, prenatal T levels showed a curvilinear (inverted U-shaped) relation to language comprehension and classification abilities. Linear relations also were observed in that prenatal T levels were inversely related to girls‘ scores on tasks assessing counting and number facts. Similarly, girls with high average block building scores had lower prenatal T and cognitive abilities were not observed. The observation of relations in girls and not boys is discussed, and the findings are examined in relation to theories of hormone-behavior relations. (APA PsycInfo Database Record (c) 2016 APA, all rights reserved)

Quelle:Relations between prenatal testosterone levels and cognitive abilities at 4 years. 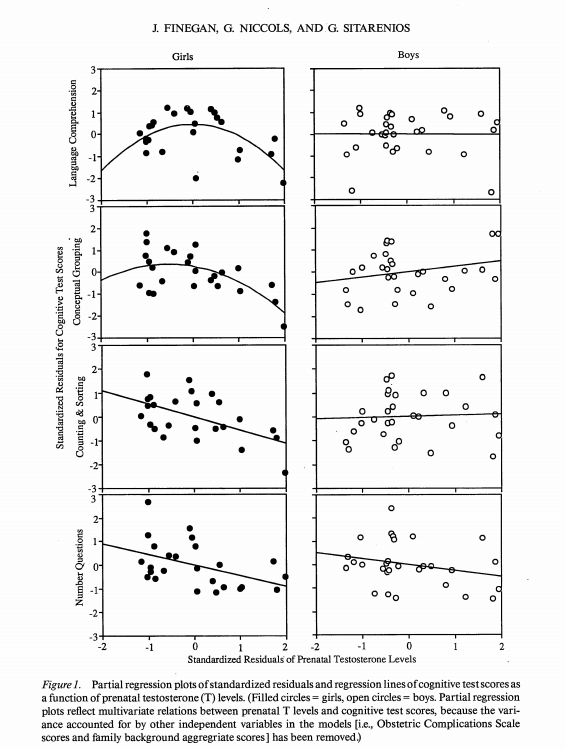 Previous studies in animals have revealed effects of both prenatal and current testosterone on brain organization and behavior. However, it is unclear how these effects translate to the human brain. Here, we refine previous procedures to clarify the relative contribution of prenatal versus current testosterone indices to cognitive function. Sixty-nine subjects performed four computerized tasks measuring mental rotation, targeting, figure-disembedding and perceptual discrimination. Using stepwise regression analyses, performance was related to free testosterone assayed in saliva samples and to second-to-fourth finger length ratios (2D:4D), a putative index of prenatal testosterone exposure. The exclusive predictor for mental rotation was found to be sex, while 2D:4D was found to be the sole predictor of targeting, exhibiting a curvilinear relation, and figure-disembedding performance, showing a linear relation. These findings suggest a substantial role for prenatal testosterone but not current testosterone in determining cognitive performance.

The cognitive performance of normal men and women was studied, grouped according to whether the subjects had relatively high or low salivary testosterone (T) concentrations. Men with lower T performed better than other groups on measures of spatial/mathematical ability, tasks at which men normally excel. Women with high T scored higher than low-T women on these same measures. T concentrations did not relate significantly to scores on tests that usually favor women or that do not typically show a sex difference. These results support suggestions of a nonlinear relationship between T concentrations and spatial ability, and demonstrate some task specificity in this respect.

Quelle: The relationship between testosterone levels and cognitive ability patterns

Biological and social-experiential factors appear to play a role in the male advantage in spatial abilities. In the present study, relations among prenatal testosterone levels, spatial play experiences, and mental rotation task performance were explored in 7-year-old boys and girls. A positive correlation was observed between prenatal testosterone levels and rate of rotation in girls. The findings were less clear for boys, but suggested the opposite pattern of results. Relations between spatial play preferences and mental rotation task performance were not observed in children of either sex. These findings are consistent with the hypothesis that testosterone acts on the fetal brain to influence the development of spatial ability.

This study investigated whether fetal testosterone (FT) measured from second trimester amniotic fluid was related to specific aspects of visuospatial ability, in children aged 7–10 years (35 boys, 29 girls). A series of tasks were used: the children’s Embedded Figures Test (EFT) (a test of attention to detail), a ball targeting task (measuring hand-eye coordination), and a computerized mental rotation task (measuring rotational ability). FT was a significant predictor for EFT scores in both boys and girls, with boys also showing a clear advantage for this task. No significant sex differences were observed in targeting. Boys scored higher than girls on mental rotation. However, no significant relationships were observed between FT and targeting on mental rotation.Girls’ performance on the mental rotation and targeting tasks was significantly related to age, indicating that these tasks may have been too difficult for the younger children. These results indicate that FT has a significant role in some aspects of cognitive development but that further work is needed to understand its effect on the different aspects of visuospatial ability.

This study examines foetal testosterone (fT) levels (measured in amniotic fluid) as a candidate biological factor, influencing sex differences in systemizing. Systemizing is a cognitive process, defined as the drive to analyze or construct systems. A recent model of psychological sex differences suggests that this is a major dimension in which the sexes differ, with males being more drawn to systemize than females. Participants included 204 children (93 female), age 6–9 years, taking part in a long-term study on the effects of fT. The systemizing quotient – children’s version was administered to these mothers to answer on behalf of their child. Males (mean = 27.79 ± 7.64) scored significantly higher than females (mean = 22.59 ± 7.53), confirming that boys systemize to a greater extent than girls. Stepwise regression analysis revealed that fT was the only significant predictor of systemizing preference when the sexes were examined together. Sex was not included in the final regression model, suggesting that fT levels play a greater role than the child’s sex in terms of differences in systemizing preference. This study suggests that the levels of fT are a biological factor influencing cognitive sex differences and lends support to the empathizing–systemizing theory of sex differences.